For example, here's my recent MySpace friend requests. As is often the case, the MySpace "Server is too busy" so I can't actually see these people's profiles, so I must rely on my batsense to figure out who they are. 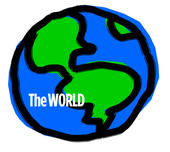 Wow, the World wants to be my friend! Oh wait, is that a band? Not sure. It's such a crappy graphic something tells me it might be a comedy show. Better wait and see.

Who? Oh, his profile pic is obviously an album cover. Verdict, musician.

Oh, finally, someone I know. Well, not really a someone, but these are two lovely comedians I know, and I'm guessing they are running a new show. Awright, that's cool! PS Is anyone better in the outstretched arm take-your-own-glamour-shot genre than comedians? No, no one is. 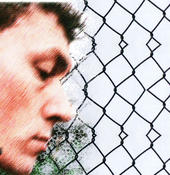 From your picture you look like an ultra moody Hugh Laurie what with your face against chain link. I'm going to take a wild guess: you're an emo/folk rock musician? How did you find me? Is there a computer monitor on the other side of that fence? 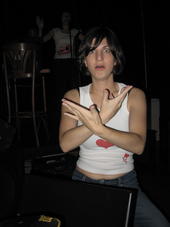 Claudia! Yes, an actual person, who is not a band, who is a comedian, and who is a actual friend of mine! Score! 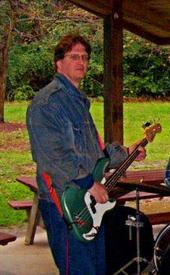 Crazy... can't remember having the pleasure of meeting a Crazy. Ah, it's crappy pic of a dude with a guitar. Lemme take a wild guess -- musican? OK, I've got to try again and check this profile. OK, it's working... Yes, he's a 44-year-old dude named crazy John, who counts Pamela Anderson and Howard Stern as his closest friends. Wow, he has over 560 "friends" most of whom are mostly nakedy women. He is a dad, he works for the state government and he's a member of Playboy model Mandy Lynn's fanclub. OH and he's a published author! Well, a self-published author. Go to Amazon and you too can download one of the "books" he co-authored, "Releasing Stress, Through The Positive Teachings Of Christ And Christianity." Note to self: Forget the content of the book, his use of the comma after the word "Stress" is the the kind of thing that keeps me up at night.

In conclusion, MySpace creeps me out. I normally like shameless promo, but unlike my other comedy superfriends, I am not driven enough to be connected in any way with the likes of Middleaged guys who have never heard of me who write Christian screeds, play guitar in acid-washed jean jackets and collect fake-boobed women like virtual trading cards.

Most everyone who is my friend on MySpace, is my friend in real life. If they aren't it's either because someone who had less then 100 friends asked to be my friend, I met them and we hit it off or I am waiting a few weeks before deleting them in a stealthy manner. Most performers say yes to everyone. I've decided to have standards. Call me hard to get. Call me bad at self-promotion. Call me old. Mainly, call me paranoid, as I'm convinced that if I say yes to everyone, odds are that one of these people will murder someone. Then I will be "friends" with a murderer. And then I will be scared they will come and hack me up when they get out of prison, as they systematically work their way through their "friends" list. "The MySpace Murders" has too catchy a ring to it to not become reality. Of course for a long time no one will know that the the murders are connected. A bunch of strippers get knocked off, some manga fans, some middleaged pervs, teens from rat's ass nowhere... BUT NOT SMART OLD SUSIE FELBER! They called her paranoid, and now they are fertillizing crocuses. Ha! Ha I say to the imaginary people who challenge my hatred of MySpace!

So if you know me, or you've ever seen me perform or if you aren't just a creepy desperate musician who wants to use me as a promo receptacle, go ahead and join the elite online halls of nerdom: try and become my MySpace friend. You'll be glad you did. http://www.myspace.com/susiefelber.