Welcome to the Internet, desperate corporate stab at a demo!

Sometimes I wish I hailed from a country that drowned female babies at birth, because at least then, as a woman, I'd have no illusions about where my place was in the world, that is, if I ever made it into the world.

Office Pirates is a new Time, Inc. site. It's a comedy site hoping to lure bored office workers, but the content (and the recent Post article) makes it clear it's trying to lure boys, right down to the skull-wearing-a-tie logo. And no, I don't think that's a graphic representation of a dead Annie Hall. 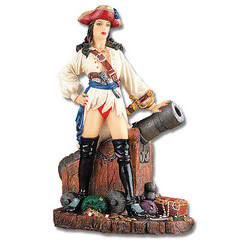 Susie, ready to fire off a rant about sexism in comedy

Why? Do women not want funny, edgy sites to share with their mateys? Do we not toil in offices all day long to earn a few doubloons? Do we not then bring home the bacon, fry it up in a pan and serve it in a hot rum reduction sauce?

Listen Office Pirates, I'm pissed at you for making your new comedy site have everything but a badly-painted "No Girls Allowed" sign on your new web playhouse.

And I'd tell you to get bent, but I have a sneaking suspicion that you're probably giving jobs to some funny boys I know and like and giving jobs to funny people is good. And I work in the biz and know you only got your little project off the ground because you had to dangle the carrot to advertisers that you'd reach the only people who matter to them: young men.

Am I angry? You bet your ass I am. It's not because I think the comedy is sexist --'cause I like sexist comedy, if it's funny, that is.

It's your faulty pandering/sexist business model that makes my labia itch. I wish the business world woke up to the fact that casting your net in this old-fashioned way just looks like stupid Boomer marketing crap. You're trying to reach young men but doing it in such a forced manner gives your site that old guy smell. Don't you want as many hits as possible? Because without the lad angle it could be a huge hit.

But the best part? They don't care. Obviously, I just don't get it.
How could I? I'm a chick.

Note: After four years of blogging, this is my first-ever rant. I won't make a habit of it, promise.
Posted by Susie Felber at 1:58 PM