WELCOME TO THE 2006 FROLYMPIC GAMES

Olympics not your cup of tea? Well let's rewind and check out this week's Felber highlights, so far:

MONDAY: A German woman woke me up at 3AM loudly asking to speak to my father, who passed away about 7 years ago. She spoke almost no English and muttered to someone else in German between shouting things at me like, "OOH AH EWW?" "SPEAK CHERMAN?" "ANYONE SPEAK CHERMANN DERE? I LETTER NOR-BEARDT FELD-AIR!" I said, "Who are you?" many times and her reply was always, "CHERMANY!" After this call I had nightmares, that is, after a few hours past and I could finally get back to sleep. No idea what it was about. I told her to send the letter. If she understood, then I’m sure there’s excitement to come. What kind of idiot calls America at 3AM expecting someone will be happy and ready for a chit chat in German?

TUESDAY: I accidentally was served, and enthusiastically ate, a baked potato with year-old sour cream. Actually it had expired Feb 19, 2005. So the dairy had celebrated its first birthday long before it got to my plate. After Googling "sour cream food poisoning" and finding evidence of multiple soft-cheese fatalities, I freaked out and called poison control. Once on the phone with poison control I found it hard not to laugh. For some reason it was suddenly totally hilarious but I didn’t want the very serious woman on the other end of the line to think it was a hoax and hang up on me leaving me to die of some rare borsht-topping disease. She told me about staying hydrated after the poisoning set in. Told me to go to the emergency room if I was throwing up and having diarrhea for longer than 24 hours. I steadied myself for a fun-filled night but amazingly, my iron constitution remained unscathed. There's more to the story, but if I reveal the dinner hostess who almost poisoned us both on this blog, she'll kill me for real.

WEDNESDAY: I had a rare night in, alone and wonderfully all to myself. I did the only thing sexier than lighting candles, taking a bath and changing into a peek-a-boo teddy... I watched a Vaudeville/Radio/TV doc on PBS, popped frozen soy wheat pizza munchies and drank Bokbunjajoo (very alcoholic Korean raspberry wine) on the rocks. SEHX-HHHHHHAY!

FELBER WINS THE BRONZE IN THE 500-METER DORK

THURSDAY: All I’ll say is that when you audition for something at a big agency, don’t accidentally swoop up their sides, stick them in your folder and walk out the door with them. Because when you find that you did it, you’ll feel like a total redheaded asshat.

ONCE AGAIN, FELBER RELUCTANTLY SNAGS THE GOLD IN THE CAREER-SABOTAGING FINALS! 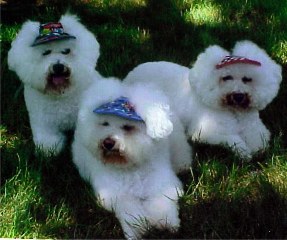 Have you been overcome by the adorability? If you don't feel woozy from going "awww" try this: 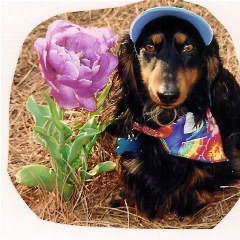 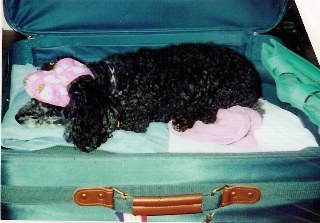 Warning: This picture has been known to cause cute-induced seizures

OK, that was only the tip of the dog in caps-burg. See if you can handle the Classy Caps Gallery

PS For some reason the Classy Caps Gallery reminded me of my friend Eric Drysdale.
Posted by Susie Felber at 12:56 PM