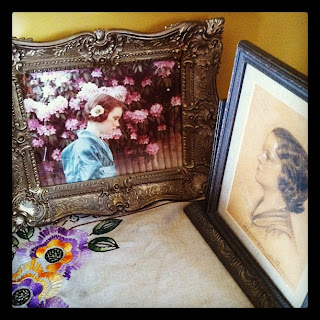 That's my grandmother and I as young women.

Never knew my grandmother, really. When I was a year old she was struck and killed by a drunk driver while attempting to cross Queens Blvd.

She was the only grandparent who met me and perhaps because I never knew anything but those stories I've always been incredibly fascinated by older generations.

But as you get older, as you dig, the stories morph... from your family, from others families. You get told the things you couldn't be told as a child. You get told the things that you weren't told as a teenager because people did such an ace job of editing them out or re-branding themselves that they forget you never knew them in the first place.

And those, even if they still can not be spoken in polite company by those touched by them, are far more interesting because you see them as real humans who have lived in three dimensions.
Posted by Susie Felber at 8:14 AM