The rodents of Perry Street have finally broken my will...

It's true. It's a long story. It involves mouse poop in my Anolon.

And for Pete's sake, it's not like I'm going very far.

But after a decade in Manhattan, most of it in the West Village (where men aren't men, the woman have Oscars and the whole place is up to your tits in pricey boutiques, cupcakes and rodentia), I am moving to the romance capitol of the world. I am talking of course about the untamed shores of WEEHAWKEN!

I'm very excited. The place is huge -- after living in a shoebox with exposed brick, I'm a size queen -- and beautiful. And I could tell you about the water and skyline views and the park right there and the Victorian home and the no alternate side parking nonsense and the fact that we'll be closer to Manhattan than many of you Brooklyners. But then you'd think I was trying to convince you. And either you'd think, "pish posh, she doth attest too much about this Weehawken!" Or you'd want to move there, and this Jersey jewel -- Weehawken! -- would suddenly be overrun with others just like me, which I would hate.

The best part? The blank stares I get from British people when I say Weehawken. 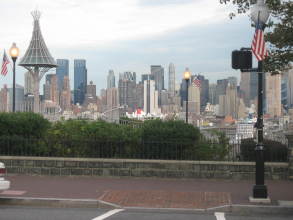 Stay tuned for details about my "farewell Hilary Swank" party.

In conclusion, I'm totally convinced that this move only cements my place as the coolest person in the world and that the streets of Weehawken are paved with gold. Wheeeeee hawk it to me!

UPDATE: Last night I saw good friends who, upon hearing the news that I was moving from the West Village to Weehawken acted like I had just said, "it's malignant", "Hitler was right", AND "Ashlee Simpson is underrated."

One friend said, before tucking into his spicy beef noodles, something funny and zingy but I can't remember exactly what it was because I've given up drinking and smoking and eating things like spicy beef over thick delicious rice noodles and my brian is not working right without the chemicals. See, I just wrote "my brian" instead of my brain. There's your proof I am not completely with it. Thank Thor I don't have a job that relies on writing for a living. Oh, wait a sec...

I even talked to another good friend on the phone whose voice betrayed the same sentiments. Tonight we're getting together before he flounces off to a party. Can he plan an intervention in less than 24 hours? Only time will tell...

But seriously, the only person who has taken the news of my moving (less than 5 miles away) to Jersey sans shock and congratulated me with sincerity and without a hint of pity was the lovely and talented RKB. Not only is she open to various sexualities, she goes the extra (less than 5) miles and proves she is open to a smorgasbord of localities. An enlightened being if I ever knew one.

On a related note, an old college bud got back in touch with me. He's living in NZ, he's composing music and, um, it looks like he has actually reached enlightenment. Forget Weehawken and my hot new pad. You win dude!
Posted by Susie Felber at 9:08 AM