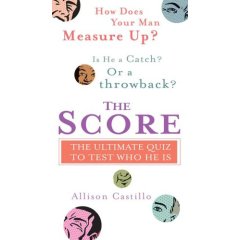 Last night I attended my pal Allison Castillo's book party at Caroline's to celebrate the release of her hilarious new book called, The Score : The Ultimate Quiz to Test Who He Is. And hilarious it is. In fact, when I write my review of it on Amazon it'll be so glowing you'll be blinded and I'll just seem like one of those fakers who write nice reviews because it's a friend's book and they begged you to do it -- but I assure you mine'll be entirely sincere.

There were passed O-durves such as sushi with three unidentifyable dipping sauces and mini-burgers with fries lovingly presented on a platter with orchids or something like. Most importantly there were free drinks, and we're not talking a gallon of Gallo and a cooler of Coors. No there was real alcohol including my favorite, Anyvodkathatdoesn'tcomeinaplasticbottle. I was tipping the bartender outrageously and I began to realize from his nervous looks that he thought I had the hots for him and was about to act on this. No dude, the passion you sensed was real, but it was for your rock hard... bottles of Stoli.

The best part (besides the free grub and alch, besides seeing many wonderful friends ((some of whom I hadn't seen in eons plus a dog's age)) and meeting Allison's awesome family) was that halfway through our giddy swilling and mingling, Allison went to the mic and proceeded to give a touching speech:

Without seeing how adorable the pint-sized Allison is, or knowing her delivery, it loses something. But it was, like everything she does, hilarious.

And of course, I bought the fucking book. You should too.
Posted by Susie Felber at 7:54 AM