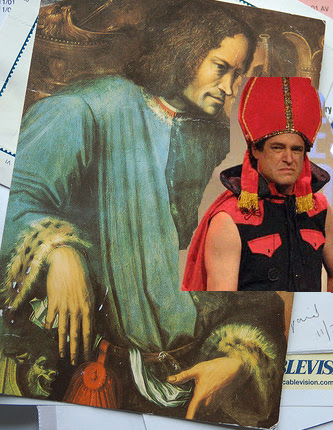 Here's the deal: I bought this postcard at the Uffizi gallery in Florence five (!) years ago because at the time I was struck by how much Georgio Vasari's posthumous portrait of Lorenzo the Magnificent looked like Matt Besser.

I've wanted to toss the card, but everytime I almost did, I thought someone in the far flung nerdly comedy community should see it, to see how creepy it is that it looks like Besser. And the times I did see Besser -- at shows we both did, or whatever -- I didn't remember the postcard because it was so unimportant, it slipped my mind.

So, I've been using the postcard as a bookmark.

The problem is, it's really annoying using a bookmark that kind of, sorta looks like Matt Besser because it makes me feel like a Besser groupie/stalker, when in fact, although he's very nice and talented, I don't think of Besser ever, except I am forced to think of him because I picked up this stupid postcard because it looked like him and I needed validation of this from some other comedy dork.

Now that I have blogged this for all the improv world to see, I can line a canary cage with the card and be done with it.

And the moral of the story is: Never pick up a postcard because it looks like someone you barely know, because the card will become a glossy paper albatross around your neck that can only end in a bizarre blog post.


PS Separated at Birth was a fab feature in Spy Magazine, which if you don't know means you're lame, foreign or way young. Still, one foreigner I know is going to say "Separated" is just a rip off of a Private Eye feature, so whachugonnado?
Posted by Susie Felber at 10:10 AM