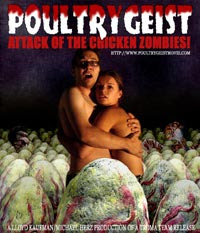 POULTRYGEIST!
ZOMBEAK!
BOK FROM THE DEAD!

Two months ago, McDonald's served me a raw chicken sandwich and I blogged about it here. The meat was so fresh, it's still flipping out the Web, and the story just won't die.

Get inside the true story of one chick, one chicken sandwich, conspiracy theorists and cursing.

Two months after the Apiary, Gawker, Comedy Central's Insider and others wrote about my being served a raw chicken sandwich (all based on my original 3/9 blog post) a food blog posted about it yesterday and then I got Boing-Boing'd.
As Boing Boing is the 2nd most popular blog in the world (according to Technorati) that's a lot of people seeing my sandwich. Add to that the copycat effect, and now others such as VH1's BWE have blogged it anew.

But now, the picture and the story are disconnected from the source and people are commenting about how the whole thing is a hoax perpetrated by me. From the comments it's clear that they've only seen the close-up shot, not my whole set of pics from that day that have been sitting there since this began. I even found and posted the receipt last night. Why? Because my honor was besmirtched by anonymous losers? Yes! And now I know how Buzz Aldrin feels, dammit!

The people trying to bust me for a hoax post comments that range from "the pictures are too pretty" (translation: you are a talented photographer... liar) to "that's obviously a whole wheat bun" (translation: your photos are so high-res I can actually see the bread molecules). Some of the comments are really nasty and take a "gotcha" tone like they're The Smoking Gun, party of one. My favorite? One commenter called me "worse than Hitler."

So before I only suffered from a raw deal. Now, however, I'm suffering from irrational fears.

Walking home from work yesterday I started to wonder if McDonald's was angry about this. Maybe very angry. Were they the ones trying to spread the word it was a hoax? OMG! I started to wonder if McDonald's had henchmen that were going to take me out. My walk across Manhattan every weeknight is so predictable -- too predictable! Like they could be sitting in a car on 41st, with a laser sight trained on my ass, just waiting for me to come by... Breathe, Felber, breathe!

THE UPSIDE: This flood of people has drawn new people to my Flickr site. One woman saw a photo of my babe and commented, "Ok this child must be made in a lab somewhere! No way that this much cuteness occurs in nature!(Seriously, OMG. He's just achingly adorable!)." Now that's a conspiracy theory I can get into.

NOTE: "Poultrygeist" is a real zombie chicken movie as is "Zombeak." "Bok From The Dead" is mine, but aspiring zombie chicken cinematographer's can take it with my blessing. You can even buy a zombie chicken T-Shirt here.
UPDATE: I love Boing Boing. They are cool and kind to set the record straight. Check it out.
Posted by Susie Felber at 9:45 AM