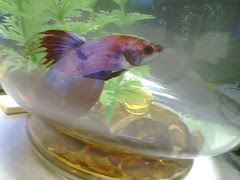 You ever have one of those days where the summer intern who sits next to you comes to show off his going-away gag gift of a "piranha" and he is seriously disappointed when you tell him it's not a piranha and so the fishes value goes down in his 19-year-old intern eyes and you're sorry you said anything for had you known that he didn't know, you may have let him down easier (or mocked him harder), but anyway he's about to hit the airport and he's certainly not taking the thing (besides, one can assume that if hair gel is banned, large, open, filled tanks with fish miiiiiight be) so the intern tells you the thing is consigned to death by starvation or media company plumbing and you are horrified (but mainly astounded by the fact that people would get a college boy a living thing as a surprise), so you offer to take the thing and he puts it behind your trash can because he liked the gag and his internship and doesn't want his department to know he didn't take his overpriced Manhattan fighting fish and he quickly bolts for a family vacation on the left coast and then you realize -- oh craptastic -- you are going to have to get a small fish in a large bowl across town and there's no way not to look like a freak doing that, especially not when the one carrying the fish is seriously pregnant, but more importantly, how do you transport it without dropping it because that would be bad especially since your care-taking hormones are running on high and if anything happens to the little guy you will have a nervous breakdown, like you need the stress of something else to be responsible for but then you lift the fish up and onto your desk and spy that the fish is watching CNN and happily waving his fronds and fins at the screen as you type and he's wormed his way into your heart and you see the years of water changes and pellet buying spread out in front of you and instead of feeling like you're caught in a bear trap the confinement feels like an embrace and the only worry you have is, "What should we name him?"


You know, one of those days?

FYI He's really pretty but a crap swimmer so I'm thinking of naming him Nat or Titan.*

*As in Natalie Wood or Titanic
Posted by Susie Felber at 10:00 AM