Those who live in lard houses
...shouldn't throw Twinkies. 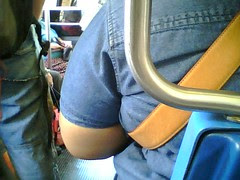 The pic above is the 20-something woman in front of me today on the M42 heading east.

She was crushing the little old man on her right, pasting him and his (perfectly textbook folded-for-commutation) New York Times to the window. And in this pic you can see a glimpse ahead to the elderly/disabled seats, where two incredibly fat elderly people took up four seats, ensuring that the other elderly people had to stand... elderly people who were frail and lacked the protective padding of the ones who were sitting pretty in the front.

Anyway, the woman pictured got on at 8th Ave., and, to the delight of the little old man, she got off at 5th Ave. Even if it was a free transfer that inspired her to wait for and get on the bus, she would've made it faster by walking. And she might've lost an ounce.

[Note: I've already proven time and time again that taking the crosstown bus is slower than walking, and should only be used by the frail or disabled... or, like myself, very pregnant women on hot days. Click here for details.]

So here's the point. And there is a point more than "look at that fat lady."

I'm not some frat boy. I have a right to be pissed. I've earned it. Let me explain.

This isn't just a case of "some of my best friends are fat." I haven't been skinny since I was seven. I was fat back when you suffered for it. Back when it was still an alternative lifestyle. Back when it meant something.

When it meant something? Yes. See in the past, fat kids were a good bet for other fat kids. Because fat kids were usually the ones who were smarter, more sensitive and more likely to read cool nerdy books and play nerdy games. Their fat was to me a pretty reliable measure of compatibility and it was a beacon. I say "pretty reliable" because it wasn't 100%. I remember one girl I grew up with I'll call Dara, even though I've never met a Dara in my life. Dara was very fat. She held the unspoken title of first-fattest all through elementary school and her title was only taken when the influx of kids in high school placed her 3rd runner up.

I befriended Dara partly out of self-interest as I knew I'd find a kindred spirit... someone who liked to read, someone with a good sense of humor, someone with odd hobbies.

And I befriended her because, let's face it, fat kids usually needed friends so they made better friends than those perennially overbooked popular kids. Befriending a fat kid was not only a good deed, it was like snagging a DaVinci at a garage sale. A win/win situation.

But the thing is, it slowly dawned on me that, unlike most fat kids, Dara wasn't very interesting. She wasn't very bright. She was sweet. I remained long time friends with her but remember thinking her fat had cruelly tricked me.

And then after adolescence I built up equity, as I was a rare commodity: I was a truly confident, sassy, sexy and pro fat back when others of my kind still loathed and closeted themselves.

But suddenly, everyone is fat. No, that's not it. Somehow, when I wasn't looking, America leap frogged over being merely fat and went straight to being doesn't-fit-in-one-seat-audition-for-the-circus fat -- obese.

On one hand I'm jealous. If I was a kid today, rather than one in the 80's, I wouldn't be considered fat. I might not have even been considered chubby. And since there is strength in numbers, all these people today display their folds proudly, where way back when they would've felt cowed into covering up.

On the other hand, I feel for today's kids. Now that so many kids are seriously fat -- and it's not the media telling me this, it's my eyes -- how do the smart, interesting, perhaps slightly messed-up kids find one another?

And on the other hand (or, the other foot, since I've run out of hands...) I am suddenly turning on my fat brothers and sisters. I am tired of not getting a seat on the bus when I commute because so many people are too fat to stay in one seat. I am sick of being crushed on a daily basis. I do not like the heat of a stranger's fat lapping over my own large and pregnant thighs.

But mainly, I've gone from being a large girl who supported and faught for all of fatkind, to staring, mouth agape, at the sheer numbers of enormous people. And they're not just in the Midwest or WalMart anymore. They're on 42nd street. I supported the obese when they were a unfairly-treated minority. But now something's changed. Mainly, they aint a minority anymore.

In conclusion, my newfound hatred of the obese is rather like Flowers for Algernon, except imagine if Charlie never became a genius, and instead, just transformed into a retarded guy who was a real jerk.

Epilogue: If, after the spawn of Satan is born, I don't lose the baby weight, and return to my normal weight (my normal being a hard-fought tippy top of the normal range on the height/weight chart) you are free to point and laugh at me.

PS Of course, all this being said, if my British relatives have the gall to mention, snicker about and hold forth on the causes of "fat" or "big Americans" to my big American butt one more time I will not be responsible for my actions.
Posted by Susie Felber at 9:17 AM