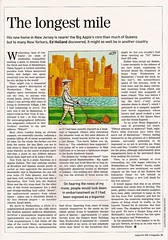 Below you'll find a fabulous article by my Ed about moving to Weehawken. It recently came out in the FT Weekend Magazine. As the mag is not published in the U.S., I am happy -- no thrilled -- to pimp it here, complete with the excellent, snazzy illustration by Chris Duggan. Note: Click here to see and read the article in its original mag form, or read it below in text sans pic.

Weehawken, land of contrasts! An oasis of residential tranquillity nestling a mere 15 minutes from the throb and hum of Manhattan’s Times Square! A verdant suburban paradise from whose manicured lawns and hedges one gazes awestruck over the most spectacular city skyline in the world!

Thus might run a demented property agent’s description of Weehawken. Thus, in only slightly more restrained terms, ran my own, to anyone who would listen. About Weehawken, where I was moving after years of living in Greenwich Village, I felt I had something to prove. Not only was it not in Manhattan, it wasn’t even in New York. It was - whisper it low - in New Jersey. My socio-geographical difficulty was poignantly reflected in New Yorkers’ reaction to my new address: “Where?”

Most cities, London being an obvious example, are essentially circular, radiating a gradual falling off of social acceptability on all sides. On the whole, the further you live from the centre, the less likely you are to talk about it. Hence the sly geographical elisions whereby, in the course of dinner party chit-chat, a street in, say, Kilburn miraculously finds itself part of St John’s Wood.

New York, up to a point, functions in a similar fashion. The vast outlying reaches of Brooklyn and Queens ascend gently in cachet as they approach the pinnacle of desirability that is Manhattan (no one will ever write I’ll Take Queens). And then. and then, well, nothing. On the west side of Manhattan, New York hits the Hudson River and the city stops dead. On the other side of this brutal escarpment lies a dark and strange-smelling land called “Jersey”, the undiscovered country from whose bourn - unless one is absolutely forced to fly into Newark airport - no traveller returns. Social death.

My move to Weehawken, a sliver of a neighbourhood perched on the cliffs above the Hudson opposite midtown Manhattan, involved a geographical displacement of approximately one mile; but to my New York acquaintances I had fallen off the edge of the world. Many, on hearing the news, would look down in embarrassment as if I had been recently exposed as a bankrupt or bigamist. Others, after consulting the etiquette book on this most delicate of situations, would bravely invite me out for a last dinner, “You know, before you, ah, leave us.” The valedictory tone suggested I was going off to join a monastery in Baja California or to become a lighthouse keeper in the South Sandwich Islands.

The disdain for “bridge and tunnel” types amongst proud Manhattanites - Big Apple veterans who had lived there for as long as, oh, two years after growing up in such impossibly glamorous locales as Michigan or Indiana - was nothing new. More damaging was the attitude of those across the East River. Smarting from years of being taunted themselves by the snobs on the island, people living in laughably obscure parts of Queens - approximately 1.7 miles further from the Empire State Building than Weehawken (I measured it) - sneered with delight at my news. At last somebody lower than them! In the boondocks they might be, but you wouldn’t find them sporting an “NJ” before their ZIP code.

Rather than accept my demise, I came earnestly to the defence of my new home, explaining in fevered detail the frequency of buses from Weehawken to Manhattan (”round the clock, by the way”), the extraordinary speed of the journey, even in rush hour, and the many convenient locations from which one could board this nonpareil of mass transit. This was before I mentioned the possibility of taking the ferry (”only seven minutes shore to shore”), which I portrayed as a uniquely magnificent travel experience whose luxury and speed evoked a rare combination of the Queen Mary and the Orient Express.

To no avail. Many diagnosed a case of protesting too much. “Fifteen minutes to Midtown? Yeah, right. That’s what everyone says when they move out of Manhattan.” Others, feeling themselves in the presence of a delusional maniac, nervously pretended to be impressed so as not to provoke me. Some even said they “couldn’t wait” to come and see the place, although unfortunately prior engagements have so far prevented them from making the journey.

Then, in a plucky attempt at civic rebranding, my wife began referring to Weehawken as “The Hawk”. Surely, under this subversive new soubriquet, we could reignite on the west of the Hudson the bohemian flame we left behind in Greenwich Village: a new Left Bank for the 21st century!

It would appear that this is an artistic movement that needs time to develop. The poets, gallery owners and kinetic sculptors have been oddly reluctant to jump on the 166 bus from Port Authority and feel for themselves the creatively energising experience of being stuck in traffic in the Lincoln Tunnel for 25 minutes. But they will come. The shopping facilities are just too good. We have a Burger King and a McDonald’s. And the library has late opening on Mondays and Wednesdays.

In the meantime, if you happen to be flying into Newark, do drop in on your way to Manhattan. Please.