Inside the Felber Hair

When I tell people my hairdresser is a internationally-renowned, globe-trotting CFA cat show judge, they often don't believe me. Well thanks to Google, now I have proof. 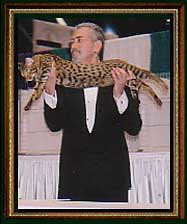 I'm being completely serious here. That there is my hairdresser, Walter. I have known him for over two decades, beginning when I tagged along with my mom to a salon he worked at called Biba on Long Island. Because of cat-show judging, he now only works at a salon about once a month, but I, like most of his clients, now just come see him in his cat-filled apartment on Christopher street. 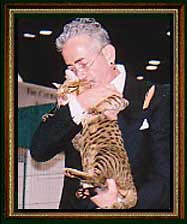 Hmmm, is this why Snoodles took the blue ribbon?

Walter's a hoot, an opera freak and we argue and laugh like we're related. Speaking of relations, Walter's mom escaped with him in her arms during Kristallnacht and she's still alive -- sharp as a tack, firmly in her 90's and nudging him multiple times a day from her place in Miami. 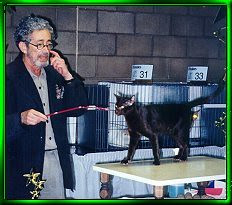 Walter has five or six exotic cats in his pad, so when you get your hair done it's like being inside a catquarium. The most affectionate cat has a sneezing great gobs of snot problem. He does it when he's in your lap, so it's like he's allergic to humans. But as I am allergic to the vibe of NYC salons (Eau de women's insecurity and salon 'tude freaks me out) going to Walter's pad and getting sneezed on is a pleasure. 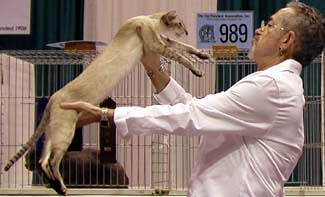 Fun fact #2: Cat show judges get paid per cat. For reals. Walter says lifting up zillions of cats in a day is hard on the arms.

I'm partial to Walter's two Maine Coons, although last night I went and saw Ferris had a new haircut. Walter said the groomer messed up the "lion cut" whatever that is. The cat didn't look like a lion, it looked like he was wearing leg warmers. 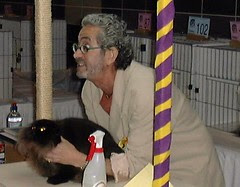 I think this photo speaks for itself...

Walter was on an Animal Planet documentary special this year called Cat People. I thought he was great. For all his kvetching about how he looked "terrible" (no) and "sounded like Harvey Fierstein" (he didn't), I think he loved it.

One of the things I love about Walter is he's so vibrant. No, that isn't code for flamboyant. I mean, yes he's that too, but he's seriously bold. I guess the best example is that this summer he was pretty knocked up because he suffered a fall. But this wasn't some slip-and-fall in the bathtub people. He injured himself while he was enthusiastically surfing with his grandkids out in California.

But anyways, what about my hair?

I mean forget about the fact that I get my hair done while I enjoy a Chardonnay or a Vodka on the rocks he has poured for me while the opera blasts and the cats jump onto the upright piano (that's decorated with pastel puffy paint because Seventeen magazine did a spread and shoot at his place years ago) causing a mad impromtu concert as they prance across the keys...

How does my hair look when he's done?

Well, why not judge my hair for yourself: 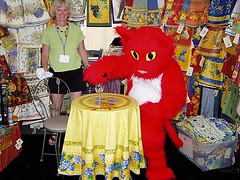 But seriously people, my hair is awesome. Y'all should know that. And now you know it's thanks to a cat show-judging dynamo named Walter.

And in case someone doesn't know my hair, or Walter himself reads this, I leave you with a pic of my fabulous Walter-ized hair... 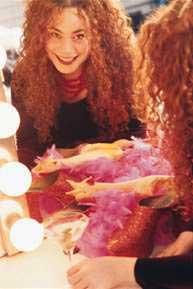 Thanks Walter!
Posted by Susie Felber at 9:07 AM