I just finished reading Dr. Cap Lesesne's upcoming book Confessions of a Park Avenue Plastic Surgeon. Ate it up like cat fish. More on this later. Later being tomorrow. Heck, the book isn't even out yet, so you people who are clamoring for my book review can wait. You are also probably a figment of my imagination. But that doesn't mean you don't deserve a book review.

And I just received the new flyer for the show I'm doing October 5th at Joe's Pub. It features me in a wig and enough eyeshadow to make-up a small country... also, I'm doing a silly pout for the camera and the effect is such that my lips look filled with a good amount of squirrel bum fat. Ah well. Anywho, the idea for the apple bong was mine and totally last minute, but the execution, by Perlman, couldn't not have been more brilliant. 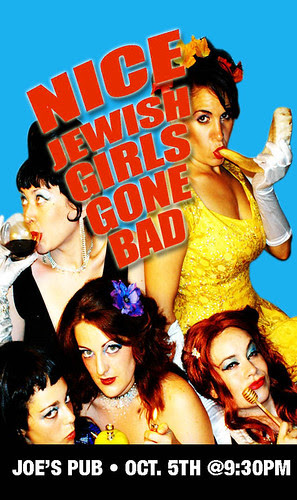 The days of awe just got awesome

Before the leaves fall and the holidays get too high, "Nice Jewish Girls Gone Bad" returns to give ya one mo' guilty pleasure before you repent. Blowing like a shofar in Vegas, these Chosen Chicks have been playing sold-out houses from California to the Catskills. Come spend another night with the sexiest yids around.

"Nice Jewish Girls Gone Bad" is a refreshing mix of comedy, music, spoken-word and show-stopping burlesque, told by the girls your mother warned you about. The girls are gearing up for another busy year, first, they will be returning to California (thanks to a generous grant from the Mazal Foundation), then they return to Boston, Pittsburgh and Baltimore and hopefully hit New Orleans and Houston. This scrappy little show from the East Village keeps on spreading the nuevo schmaltz and the wayward girls. Now they are teaming up with the author of "The Modern Jewish Girl's Guide to Guilt" to present a terrific show back where they started, joe's pub for the The NYC Underground Comedy Festival, featuring the very best of J-girl scribes, comics and spoken word artists,such as Emmy Award Winner Judy Gold (HBO, Comedy Central, etc.) Ophira Eisenberg (Comedy Central), Susie Felber (Comedy Central/Conan), spoken word artist, Vanessa Hidary (HBO), Cory Kahaney (Last Comic Standing), authors Wendy Shanker (Fat Girl's Guide to Life), Sheryl Zohn ("Penn & Teller: Bullshit!"), Ruthie Ellenson and Elisa Albert, hosted by the Goddess Perlman (TLC/MTV) with a whole slew of new outfits to inspire your high holiday look.