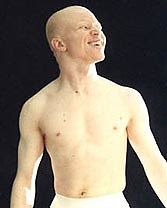 Victor Varnado is an actor, director, comedian and albino. So why didn't he get the role of the albino killer in "The Da Vinci Code?"

It's very funny, because Victor is very funny. And it got up in less than 24 hours from my pitch to publish thanks to many talented people who are not me. Thanks people who aren't me! You rock.

Update: Awesome. And I think Gawker scooped me. Woo!

Update 3: OK, yes, for those of you who asked I am dying to respond to the two Gawker anon people who wrote comments that show they obviously didn't read the piece they were commenting on and/or just wanted to show off their indy film knowledge, but I will control myself! Or I will try. I am now writing "I will not comment on a Gawker post that is about me" 100 times on the blackboard.
Posted by Susie Felber at 11:52 AM