Who says there are no good parts for women?
Part of my continuing series on casting opportunities for women.

From this week's casting breakdowns, I found that the boys behind Law & Order: SUV currently have three -- count 'em THREE -- parts for women available: a two-time rape victim, a three-time rape victim or a two-time "rape/murder victim". I have excerpted these awesome New York casting opportunities below. Good luck!

[MEGAN CARLISLE] Female, Caucasian, mid-late 30's; Middle class. Rape Victim. 6 months pregnant. Our only victim of this rapist not to have been attacked at least a second time - or so we think…

[GINA MILLER] Female, Caucasian, late 20's; 3 time rape victim by the same rapist. […]She details the events of her crime to our Detectives in all its emotional detail.

[ELIZABETH HASSENBACK] Female, Caucasian, 30 yrs; Rape/Murder Victim. She's a take charge, courageous and determined woman who is unwilling to remain a victim. After being raped twice by the same man she takes the law into her own hands...

***
Me? I don't think I could rape-it-up properly. And anyways, I want this part in this film:

[SMOKING CARNY] 30s-40s. This carny smoking a cigarette at a carnival answers Eric when he asks if they have one of those jumping castles for kids...1 line, 1 scene 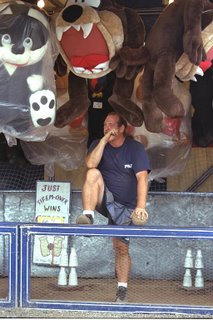 I want to live the dream!

I would say, "Look chump, you want jumping castles? Go to F@#$in' Disney."

Or maybe I'd say, "Jump this, buck-o" while smoking and pointing at my too-tight shorts. Then I'd cackle at Eric. Then I'd have a coughing fit.

Just remember, the casting sheet does not say it's got to be a man. A gal can dream.
Posted by Susie Felber at 12:17 PM