Yup, my hairdresser, Walter (who I've known since the earth was still cooling), is on PBS tonight @ 8PM in a special called Show Cats. 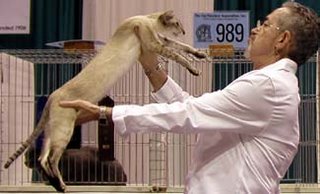 This is Walter. Do I really need to add that he's the one on the right?

And here's more about Walter, the international cat show judge/hairdresser in a little blog piece I wrote called "Inside the Felber Hair."

Here's more on the show from PBS.

Here's the NY Times take on the special.

Here's an article that quotes Walter in The Seattle Times.

My hairdresser getting more on-camera work and press than me? Only in New York kids.