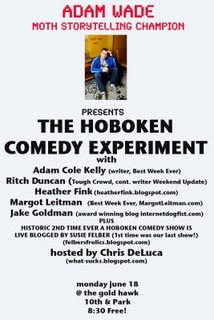 Note: Photos will be taken and added later. My computer is too slow to handle my photog and lightening fast wit. UPDATE: Photos added!

9:00pm-- It's on! Well, not really, but the music is loud and so it seems like something is going to happen. Ooooh, very exciting. 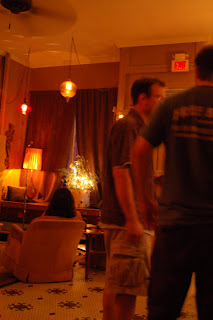 Crowd going insane. If by insane, you mean listening and sipping drinks.

9:06 -- Deluca introduces me, mentions I am live-blogging. My only credit he announces is that I live in Weehawken. That's awesome. I do comedy for a decade and I get "lives in Weehawken." Deluca = dead.

9:08 -- Deluca going 100 m.p.h. on marriage material. He's too fast for my typing skills. He did punchlines that involved a condor, Stockholm Syndrome, the Hulk. Listen people, if you want the jokes ya gotta come to the show.

9:23 -- Deluca up and presenting the faux survey, "Worst names for describing a blow job." "Thorny, Lack Luster, Capra-esque, Maternal." .And the winner for worst adjective to describe a blow job -- "toothy."

9:25 -- Deluca on Port Authority bus terminal day v. night, "A head on a skateboad tried to sell me batteries" and "I lost my wallet, my identity was stolen by a dragon."

9:31 -- Margot is talking too fast for my crap typing. People like her a lot! Getting mega laughs. Here's a sample of words I can capture, "genital warts" "hpv" "Nancy Reagan" 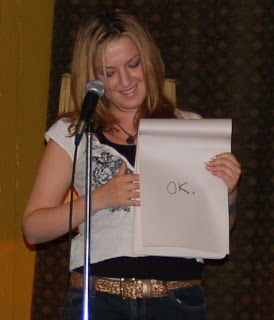 I screwed up and didn't get a photo of Margot that was cool, so please forgive and enjoy the photo of Heather (who went up later in the eve).

9:33 -- Thought: Judging from the laughter, and the haircuts, Hoboken has a lot more straight men than Manhattan and Brooklyn. Just saying.

9:35 -- Margot tells us she's from "the town next to the town Bon Jovi is from." This is way beyond my geographical knowledge. Jerseyites seem to dig it.

9:36 -- Adam Cole Kelly, writer for Best Week Ever, is up. Tells ladies not to stare at his legs, that it makes him uncomfortable. Tells his gold "sun wearing sunglasses" joke.

9:40 -- Adam tells fat chick at Applebee's joke. It does so well I am now convinced there are more straight men in Hoboken. 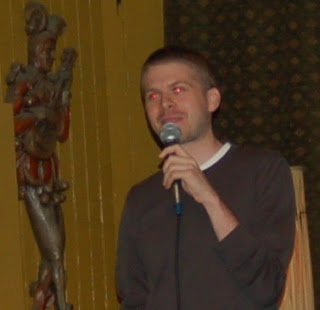 <-- This photo I took of Adam is NOT payback for him making fat chicks joke. But it could be, couldn't it?

9:41 -- Adam, probably sensing the undeniable hetero make-up of the room, launches into his pornography material.

9:45 -- Deluca, our multi-talented host, asks me, from the stage, how live blogging is going. I am so focused eye of the tiger-style on my blog I make barely any sense. Awesome. But luckily no one outside of this room will ever know I made no sense. Oh. Wait a minute...

9:50 -- Thought: It's possible that only my mom is following this blogging, live. Hi mom!

9:53 -- Did you know... Hoboken411 covered this show two days ago. And Real Hoboken has a funny interview by Adam with Deluca about tonight's show.

10:00 -- Deluca on Wade's touching story of young love, "That's a great story Adam, but it reads a lot better on the police report."

10:01 -- Deluca tells us what he was thinking about our audience, "I wish Anne Franks' family were as silent as they are today, maybe they'd be alive today."

10:03 --Heather Fink up! Opens on "Bulimic pony's at a Japanese restaurant" bit and seques into "back fat is the funniest fat."

10:06 -- Oh, before Heather went up Deluca complained saying there were no comments on my blog, so he counld respond. Dude, I haven't had comments ever. Not once since 2002. Maybe you don't know you hired THE Susie Felber: Live-blogger to the non-stars?

10:07 -- Heather is hot and doing odd material. Now the hetero boys are scared. You let your freak flag fly girl! 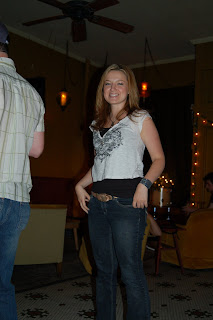 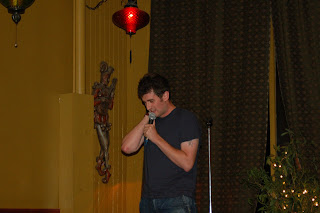 10:14 -- Jake doing a surreal penis/astronaut bit. He is riding that "freak the crowd out" wave. He ends on, "I was going to put a jar of honey on the stage and have the honey do these same jokes... and I think it would've had the same effect."

10:15 -- Deluca plugging the email list! Thanking everyone! Calls me beautiful. How often is a live-blogger called beautiful? I am clapping and hooting louder than anyone for everyone.

10:17 -- Show over! A good time had by all. My camera battery is dead. That's how rockin' the show was. Broadway Schmoadway! Woodstock Schmouldstock! Ringing Brothers-Schmingling Brothers! This, the Hoboken Comedy Experiment is the greatest show on earth. Until next time Hoboken...

UPDATE: After the show Deluca told me someone on Hoboken 411 comments called me a great blogger and big fun. Very apt description of me and my fun! Big kisses to the anon person who said that -- mwah!
Posted by Susie Felber at 5:13 PM