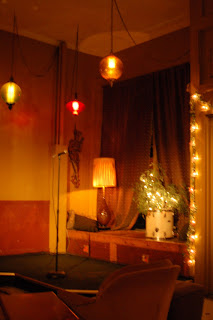 LIVE from HOBOKEN -- Live Blogging! How exciting! Anything can happen, but probably won't! 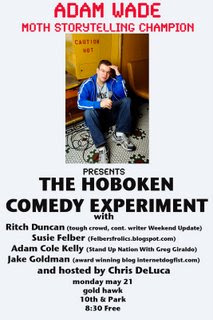 9:07 Comedian Ritch Duncan takes a call from Paul Sullivan. Sully, who is currently driving on the left coast, needs to know if Andres the Giant played Bigfoot on the 6 Million Dollar Man. My Google oracle says yes. As you can see, the show has not started yet.

9:15 GAME ON! Adam Wade introduces Chris Deluca. Deluca wowing the massive crowd with his "wife doesn't have a tattoo on the small of her back" material. Here "massive" = 10.

9:20 Deluca does "Lost" material. I don't watch the show so I am truly lost. But the crowd she is getting bigger! 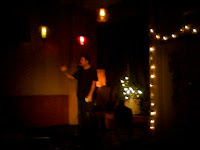 9:26 Deluca sexual fantasies material. The crowd is going crazy. It's like /Woodstock, Jamestown and a rave, all in one.

9:27 GAME!!! Deluca introduces a game in which the audience can win free drinks. Oooooh.... very exciting! Game is called, "Is Wade Right?" Sound man is doing a cracking good job with the groovy effects.

9:29 An audience member wins three drinks just for having two brain cells to scrape together. Well, after the drinks maybe he'll only have one. New audience has been filing in. From where? Have they been hooked by this entrancing live-blogging? No doubt!

9:30 Duncan has been introduced. Everyone was very excited to hear his SNL and Tough Crowd credits. Then Deluca mentioned Duncan's hockey blog and the life was sucked out of the room. A couple of audience members hung themselves.

9:36 Duncan is killing! Some joke about "7-grain toast" and a prayer breakfast. I have no idea. I can't listen and live blog. No. Especially not when I've had a Stoli on the rocks with a lemon, my first real drink since the earth was still cooling.

9:39 Duncan is discussing a bad neighborhood of heaven. OH! He just mentioned I was live-blogging. The crowd looked at me and clapped, giving Duncan an opportunity to take a swig of his drink. I made a face to express how lame it is to be the live-blogger, which it is.

9:44 Duncan is finishing up. I want another drink but have no money. I'm on next. How can I live blog myself?

9:57 I'm off. I was very flustered. An actual Hoboken mom showed up with husband. She's super cute. I was too busy blogging to focus on my set and couldn't go all eye of the tiger on the audience with my usual outrageous laser-like comedy death ray of hilarity. Next time.

9:58 Adam Cole-Kelly up. Introduced as a writer for "Best Week Ever". All I can think of is how I was only introduced as a blogger. The cute Hoboken mom probably thinks I'm a loser! Oh -- Adam's "sun wearing glasses" joke is gold. Adam CK is cute and funny. If this were a panty-throwing crowd, panties would be thrown.

10:05Deluca introduces Adam Wade. Describes him as, "This American Life but retarded." Wade is adorable talking about a women he had a crush on as a boy. Women who walked in late are saying "awww" a lot to his brand of hilar-a-cute comedy, Wade calls his brother Matt on stage for confirmation for a bathroom story. We can hear the phone through the mic. Wade asks his brother to say something nice about him to the assembled crowd. 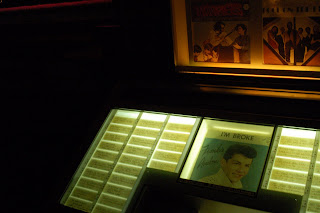 10:21 I'm posting a picture of the jukebox I took when I showed up. I don't know. I can not express the hilarity of the comedians on stage! Notice how Frankie Avalon is featured on the jukebox. It's like telling Frank Sinatra, Hoboken's most famous son, we don't care that you never came back. We found another Frank.

10:24 Deluca says Wade is more like "This American Life with Fetal Alcohol Syndrome." Now everyone is clapping. Wade is passing the email list, forced to apologise to everyone. 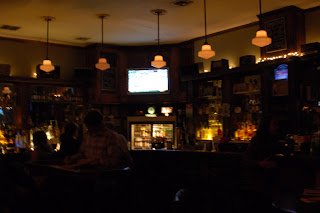 10:30Show over. Going to ignore my long time friends (they'll always be there, no biggie) to chat with hot, smart looking Hoboken mom. 10-4 good buddies.
Posted by Susie Felber at 5:49 PM