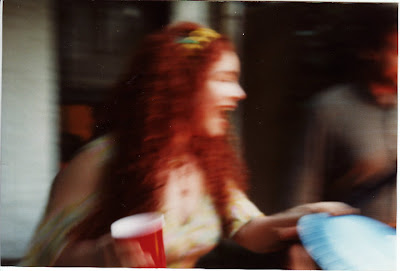 That's me, late 90's. Photo taken by and recently uploaded to Facebook by Paul Sullivan.

I love it. Paul titled it "Susie...fast and blurry" and I think that's an apt posthumous description of my 20's.

Way back then I had more fun than should be allowed. I had fabsurdly stunning long hair, which is still lovely, but then, like my recently unleashed personality -- it was nearly too big to be believed. And halfway through my 2nd decade I finally got up the guts to pursue my dream -- writing and performing and producing and living and breathing comedy.

There aren't many photos of me from the 90's. Perhaps more than most, because I was a performer. But my best-looking decade passed in the generation before digital. If photos weren't in focus it was usually a mistake, not an artistic choice.

We didn't take close-up pics of flower petals at a friend's wedding or our cheese because that was when you were paying for each snap and most people only used disposable cameras anyway. A picture at night yielded only flash-bleached sweaty faces, which is an even better reason then the expense as to why we didn't take many.

I'm amazed and impressed when comedians today, after performing for a nanosecond, have beautiful PR photos. For us headshots were a major expense and photos were only for magazines or newspapers so why do them when you're just a nobody comic hoofing from minor show to Rat Hole Rep and back again?

I love the photo because of what is unseen. Which is nearly everything. When my grandchildren look back they'll be a digital trail of who I was. It won't be as complete as some people's -- those who "check in" on applications like Foursquare will leave a map for future generations to trace their journeys from Chipolte Grill to Abtastic Fitness Center and back -- but there will be something.

And so, I adore this crappy beautiful photo for what it doesn't show (what is that blue thing in my hand and why is/what is hilarious?) and for what will never be shown because it can not be. For all the moments that can only be dredged up because they are carried within friends in their increasingly leaky brains.

How nice it would be to have some more beautiful high-res photos or video of me from that era. But then I know I may have behaved differently if I'd thought a camera was poised to record every meal, every quip, every second. I might not have taken as many chances on stage and in life.

And although someday there might be a relation who wishes they knew more about me, as much as I fantasize about my long-lost family, now that everyone is documented and terribly vain (and how I lap up all of it, even when people share way too much and it becomes awfully creepy) -- I now crave and find equity in the mystery and the moments that -- until we have time machines -- will never be revealed.

Thanks for the memories, Paul.

PS If you upload and tag an unattractive photo of me, I'm sending the boys around.

I don't know what boys.

I'll have to find some, I guess.

But seriously, sorta kinda, not really.
Posted by Susie Felber at 7:16 PM