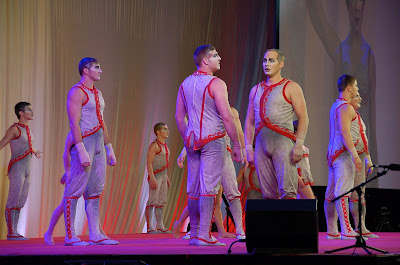 Just got finished with two 14+ hour days running social media for the World Business Forum. I was packing an astonishing amount of electronic gear and assorted chargers. I could've used a Sherpa and a donkey or three.

I got to hear most of the speakers. When Ben Zander got thousands of biz types to all sing "Ode to Joy" in German, it genuinely got me -- you know, a little farklempt. Zander was a fave of many and no doubt about it, he was grand. Highly entertaining and smart. But he was very much like your zany Jewish uncle after a glass of slivovitz. And that's awesome, but not so exotic. And then I realized -- ah -- not everybody has a zany Jewish uncle.

Many great talks and I'm not playing favorites (and I'm not sayin' who could stand to kick it up a notch) but I really enjoyed Howard Schultz, CEO of Starbucks. His conviction to make the world a better place seemed genuine. He seems passionate about making a difference.

And Malcolm Gladwell always weaves a good story. This time he waxed on about learning, children and what he termed "useful disadvantages." He said, “The idea that more resources always lead to better results is a pernicious lie." Which of course is delish to any over-engaged parent, making us feel better about not giving little Johnny private school along with corneal transplant lessons which start immediately after harp class.

But really, in the end, it's performance. That's why I like it. Even though these are business people and business minds, it's live. Humans have good days, better days and the like. And the fact that this was a live show was thrilling. Been so long since I was a serious actress and stage manager. Comedy requires so little stage craft, mostly. But I always liked the backstage scene of big shows -- the tech guys, the performers warming up, and at this event, they had two translation booths behind the set with a total of four people providing Spanish to English and English to Spanish feeds to the world on the fly. I love backstage because it's like a dark club whose secrets rarely spill out. I love the things that go wrong that the audience never sees because people scramble to get it right.

Anyway, I met new people, played with new apps and got to take cool photos. Those fetching buff men are from Cirque du Soleil (they were launching a new Montreal biz and creativity conference called C2-MTL) and yeah, that's President Clinton, below.

It was great meeting people I only knew digitally as I work from home and many of the people who put this conference work out of HQ in Argentina. On a side note, the men from Argentina win the best-dressed award. If word got out about this odd breed of sharp-looking straight man they'd have to build border fences -- to keep the women of America in.

But seriously folks, I learned tons -- including what I could do better next time I do social media for a huge event. This one, the World Business Forum, had over four thousand attendees. Don't get me wrong: I was awesome, I hit my marks. But best I can explain it? Even if you know how to flip a switch, some lights can't be turned on until you enter the house. Knowwotimean? 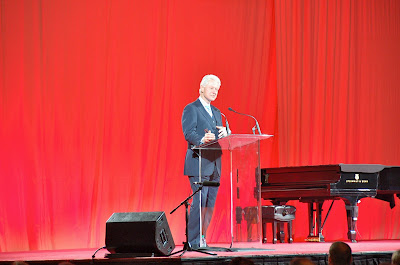 I'll be posting more of my photos online soon and will add a link. For right now, you could go on the facebook page for the conference and see some of them now. http://www.facebook.com/WorldBusinessForum And 'like' the page if you can. Because, ya know, that'd be nice.

Photos: By me and my Nikon -- fancy schmancy lens thanks to R & P Holland
Posted by Susie Felber at 5:37 AM