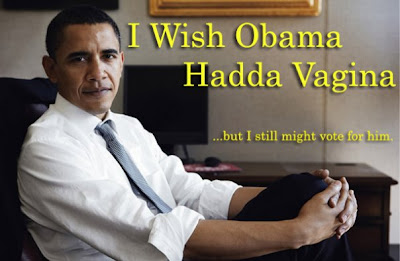 I made the pic you see here for my Facebook group, Wish Obama Had a Vagina! (but I still might vote for him...).

Group Description:
Are you a woman (or a menimist) who'd be ultra psyched to have a woman President but you aren't sure Clinton is the best candidate? Do you worry that if you vote for Obama you might be selling your sisters down the road? Do you feel like none of the candidates are talking about women's issues so you're screwed any which way? Then this group is for you!

Barring any pictures of Obama throttling a peck of puppies coming out before now and Super Tomorrow, I am voting for Obama.

My reasoning is very different from my esteemed brother's:

1. I think we need someone other than a Bush or a Clinton.

2. I don't think Hillary can win against McCain. To be honest, in that race, I might go McCain.*

3. While I would love a woman president, she's said nothing that speaks to me as a woman, mother, sister, wife. Maybe she can't, for fear of being -- gasp! -- a woman. But with no proof, I've no reason to think she'd improve our lot. In fact, just like in the Primaries, she might need to put her female agenda on ice. American women are so screwed. We've no paid maternity leave, no flex work options/incentives for business to give us them, or equal pay -- an issue I am passionate about and one I wrote about here.
At the very least, an Obama/McCain race would elevate the dialogue.
SO LET'S GET IT ON! OBAMA - OBAMA -OBAMA! Hey ho -- let's GO! 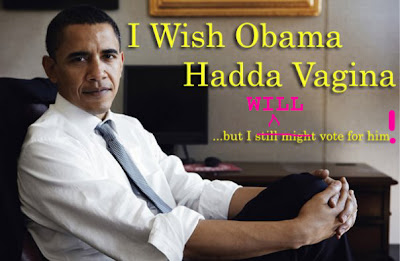 *My secret: Until this election, I was a life-long Independent. Or, more like, a Democrat-loathing liberal. So I've never voted in a primary. I changed my affiliation to vote in this one. But, I didn't know that unlike my old voting grounds (NY), in New Jersey, unaffiliateds can vote. And why didn't I know this? Because I'm an idiot.