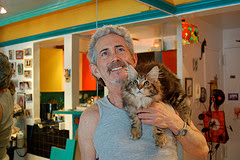 Walter, my hairdresser (and internationally-renowned cat show judge who is currently getting way more TV work than me) has a new baby. She's 3 months old. She's a Maine Coon named Ann Richards. I met her on Sunday and went wild for the name.

He said, "Well since Huey is named after a politician..."

"It's awesome." I said, interrupting.

"And I wanted the name of a strong woman..."

"No, Cruella is too over-the-top mean. Ann Richards is SO amazing -- I love it!" I said.

"Then you suggested I name her Ann Richards."

Yes, that's right. I went crazy for the kitten's name, having no recollection that I am the one who had suggested that name. Huey & Ann wonder why the Felber chick can't remember anything PS Speaking of Cats and politicians, did y'all know that Dick Cheney is not only our vice President, but a CFA judge? Yeah, me neither! See below: